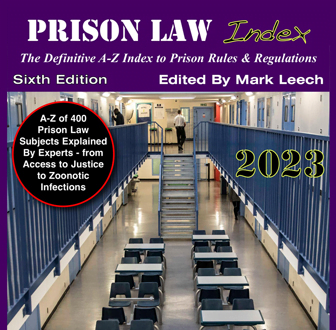 About The Prison Oracle

Get Full Access Today – for less than a coffee a week

By Mark Leech
Editor of The Prison Oracle

THE PRISON ORACLE: BACK STORY

I once had a dream – well two dreams really, but I’ll come to the second in a moment.

The first ‘dream’ started life 30 years ago, sitting in the large caged Reception cubicle at Wandsworth prison in south London, I was waiting for my prison escort to arrive to take me to Parkhurst Prison on the Isle of Wight – a journey that was destined to end in the highest court in the United Kingdom and change British prison law forever, but that’s another story.

It was in that caged Wandsworth Prison cubicle that day that I found myself surrounded by a mixture of prisoners who had just arrived at Wandsworth and others, like myself, who were lucky enough to be leaving.

Minding my own business I sat and listened to the questions that went back and forth between the concerns of the worried new arrivals and the old-hand Norman Stanley Fletcher replies of those like myself who couldn’t wait to get out of there.

What’s it like here? What are the visits like? Is there any work available, and what are the wages like? What are the cells like? What about the food? Is it true they have a painting and decorating course? What’s the doctor like? Can I see a dentist while I’m here, and is there a waiting list?

Suddenly a penny dropped: I wonder if there’s a book that gives details about every prison and what it has to offer?

During the journey that afternoon to Parkhurst Prison I asked the Prison Officer I was shackled to: “Is there a reference book on Prisons?”

“No” came the terse reply, in a way that made it clear questions were not invited and comments were equally unwelcome.

Secretly though, right there and then, I decided that I was going to write that book.

“You’re going to write a book on Prisons Leech?!”

The Parkhurst Wing Governor laughed and shook his head in disbelief as I told him of my plan during my Induction Interview a few days later.

Well today, 23 annual editions later, ‘that book’ – The Prisons Handbook – has become the 1,600-page definitive annual reference book on the prison system of England and Wales that is sold all over the world.

One dream delivered – and now let me tell how how the second one was born; this web site.

In May 2018, having spent hours on the internet trying to locate a copy of The Woolf Report for some research I was doing, and having had to give up exasperated at my inability to find it, I had another dream.

One place, where everything on prisons was brought together, that was user-friendly, time-saving, comprehensive, totally independent, and where full access cost less than a cup of coffee a week; The Prison Oracle was born.

Fifteen months later, in October 2019, the dream became reality when The Prison Oracle opened its cyber doors and won outstanding reviews from those who have spent a lifetime working and living in prisons.

The Prison Oracle now has over 10,000 members, it covers 44,000 pages, it employs over a dozen ex offender page editors who keep the site up to date – and yes it contains a copy of The Woolf Report, along with almost every other valuable and vintage publication on prisons going right back to The State of The Prisons published by John Howard in 1777.

What’s on The Prison Oracle?

The Prison Oracle is the definitive comprehensive prisons website for prisons in England and Wales – giving you the most comprehensive, up-to-date information on every single one of the 118 Prisons and Young Offender Institutions in England and Wales – check out an example prison page here – including the latest IMB and HMIP Inspection Reports, fatal incident reports on those who have died in this prison – all immediately on publication – and in addition you get all this too….

RECEPTION TO RELEASE. 100’s of pages of detailed, up-to-date policy information on:

PRISON STAFF
This Section is about prison staff:
How to join
Prepare for interview
Go through training
Details of the brand new 2021/2022 Level 3 Custody and Detention Prison Officer Apprenticeship that takes 12-18montha to complete and replaces the former Prison Officer Entry level Training (POELT) Course – and for those who wish to advance we set out details of the two year UNLOCKEDGRADS course that results on completion with a Master’s Degree and people well on their way to Prison Governor status.

WATCHDOGS
Independent bodies that have a duty to Inspect and Monitor the criminal justice system
Criminal Justice Joint Inspections – hundreds of Joint Inspection Reports, from 2000 to date
HM CPS Inspectorate – 350 Inspection reports divided into: Area Assurance, Area, Annual and Audit, and Ad Hoc Reports
IMB Reports – thousands of Independent Monitoring Board Annual Reports on every prison and YOI in the country, from 2009 to date
NPM Reports– Key Documents and details of all 21 statutory organisations that make up the National Preventive Mechanism
PPO Reports – thousands of death in custody reports, fully cross-referenced you won’t find anywhere else and right up to date
HM Prisons Inspectorate Reports – over 1,00 prison and YOI inspection reports- and their Thematic Reviews too, from 2005 to date
HM Probation Inspectorate Reports – over 1,500 Probation Inspectorate reports – and their Thematic Reviews too right up to date

NEWS DESK Breaking News on prisons as it happens Latest Rules, Reports & Policies as they are issued

PRISONERS & THE LAW 2022
The law relating to prisoners is complex, their rights depend on their status as remand or convicted prisoners, as adults or young offenders,  male or female – or transgendered – and also their sentence length and security categorisation. This section, edited by prison law Barristers, examines prisoners and the law and gives you:

CRIMINAL CASES REVIEW COMMISSION DATABASE
Fed up with searching for CCRC cases referred to the Court of Appeal, the case details, why they were referred and the outcome of the case? Well now you don’t have to – it’s all here on our full CCRC Database of over 400 cases.

PARLIAMENTARY JUSTICE SELECT COMMITTEE
Containing almost 1,000 Published Reports and Evidential Correspondence from the Parliamentary Justice Select Committee, from Parliamentary Sessions for every year right back to 2002-2003

CONVERSE
The largest circulation national monthly prisons newspaper, and the only one edited and published 100% by reformed offenders is available online to Enhanced and Corporate subscribers of The Prison Oracle – and our archives back to 2007 too!

PERSONAL INJURY IN PRISON
With violence in prisons at record levels we make this important section free to all – an expert explanation of personal injury in prison by Michael Jefferies, solicitor and Chairman of the Prison Injury Lawyers Association writes on on the rights and routes to claim compensation for personal injury sustained in prison where the injury was caused by no fault of the person injured.

Expert explanation by Michael Jefferies, solicitor and Chairman of the Prison Injury Lawyers Association on the rights and routes to claim compensation for personal injury sustained in prison where the injury was caused by no fault of the person injured.

What people say about The Prison Oracle

‘I can now download all the things I need in minutes’
Maureen Jenson: Prison Librarian

‘Excellent, every IMB Member should subscribe to this’
Paul Johnson: Independent Monitoring Board Member

‘The best £2.50 a week I’ve ever spent’
Jeanne McCudden: mother of a Young Offender

‘This is fantastic, I’ve just signed up and it’s so useful – thank you!’
Tammy Banks (Linkedin)

“I’ve spent considerable time perusing the extensive content and found it to be an incredibly useful source. What I like best about it, is the idea that the information is there at your fingertips, without the need to trawl through page after page of internet content. The site is user friendly and easy to navigate. I also think it would lend itself well to an app for even more ease of use. The back catalogue of Converse was another nice surprise as skimming through past editions reminds me of fast-paced developments within the prison estate, some of which have completely slipped my mind. Overall, for anyone interested in prisons, this is most certainly a valuable and convenient source.”
Jo Prescott, Lecturer in Criminology & PhD candidate (@Joprescott8)

* Normal Enhanced Access is £2.49 a week, but for those who have purchased any of our products in the last 12 months they will have received a coupon code that reduces this to just £1.99 a week for the first three months.