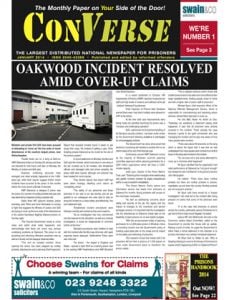 GET YOUR COPY HERE! Some of what is in the latest edition – 32 pages, delivering up to 60,000 copies into over a 120 prisons every month – THAT is Converse! OAKWOOD INCIDENT RESOLVED AMID COVER UP CLAIMS * ‘MURDERED’ PRISONER NAMED * SWAIN AND CO – FAIRNESS NOW THE MAJOR FACTOR IN ORAL DECISIONS […]

Tweets by prisonsorguk You are unauthorized to view this page.