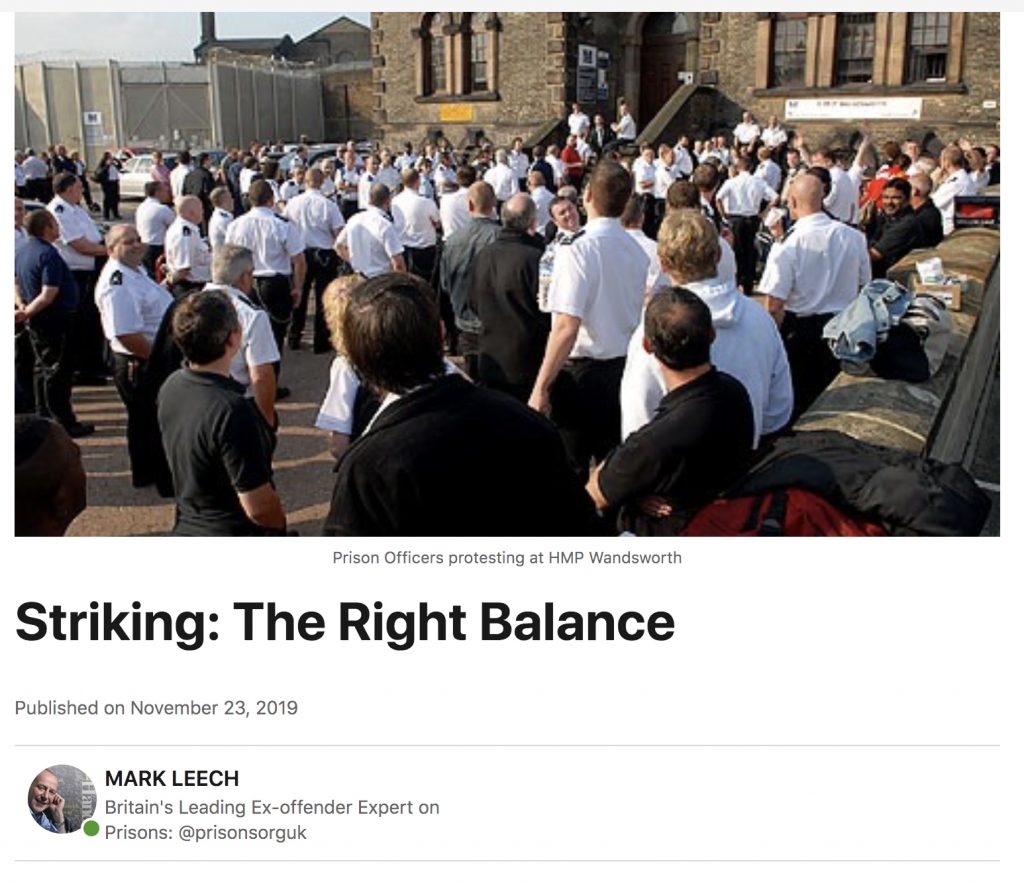 On 4th September 2019, Richard Burgon the Shadow Justice Secretary and a man who in three weeks’ time could be the new Lord Chancellor in charge of Prisons, confirmed to me in an email that when next elected to govern Labour will reinstate the right of prison officers to strike.

It was, at the very least, the intention of the Prison Officers’ Association (POA) that at 07:30 hrs on Wednesday 1st March 2017, when Prison Officers in England and Wales turned up for their day shift, they would be read what was intended to be until then a secret Briefing Paper – prepared by their POA trade union a week earlier, and of which the following is an extract:

“All POA members are asked to start their shifts at the official start time at the gate. All members should withdraw from voluntary roles until further notice. This includes, but is not limited to, ACCT assessor, first aider, C&R, Advance Training and call-out save for the protection of life and staff safety, covering non-profiled work save for the protection of life, C&R Instructor, hostage negotiator, staff mentor, overtime, detached duty, Payment Plus, as set out within the proposal. This list is not exhaustive, but should be used to demonstrate to members that if they continue to volunteer for work that is not profiled and work for nothing, none of us will continue to ignore the real issues of staff safety pay and conditions.”

Well that at least was the POA’s intention – but it never got to that.

The day before the Briefing Paper was to be read to POA Members, the Ministry of Justice got wind of the POA’s plan and their lawyers went to the High Court and successfully obtained an injunction to stop the Briefing Paper being read the following morning.

This event was just one more legal battle fought during what has been a 40-year continuum of POA disputes with the various agencies responsible, at different times over that period, for the employment of its Members. It is a series of battles the POA has rarely won, has been foolish to the point of idiocy at times to have brought about – but it is also a series of battles that are wholly understandable too, given the often poor, and yes sometimes dreadful treatment that prison officers have received from their various employers over the years.

Currently prison officers are banned from striking under the Criminal Justice and Public Order Act 1994. Under Section 127 of the Act, it states that a prison officer will be breaking the law if they withhold their services or commit a breach of discipline. It is also unlawful under that statute to ‘induce’ anyone to withhold such services or commit a breach of discipline such as disobeying a lawful order or written instruction.

The POA unsuccessfully sought to argue that as the Briefing Paper only made reference to ‘voluntary roles’ this did not amount to ‘industrial action’ as prison officers were not obliged to carry out functions which were voluntary in nature and for which they would not be paid.

The Court however dismissed that submission:

“It is necessary in that regard to consider the totality of the action which is to be taken and not to focus narrowly on each individual aspect of it. What is being proposed is on a national basis that all members of the Prison Officers’ Association should withdraw from a whole series of voluntary roles. Those include such matters as the provision of first aid and undertaking assessments to determine whether prisoners are at risk of suicide and self-harm. It seems to me self-evident that a nationwide policy of withdrawing from providing such assessments, to take that as an example, gives rise to a risk to the safety of prisoners. When one looks at the proposed actions as a whole, that risk is further magnified.”

So, whether the tasks for which labour is being withdrawn is either voluntary or contractual in nature is irrelevant in law; where it is national in scope such withdrawal of labour is caught by the ban on striking set out in the Act.

It’s easy to understand then why prison officers therefore feel isolated and unsupported – they work within a system which is violent in nature, overcrowded in capacity, under-staffed and long-starved in terms of resources, where promises made by their employer on the basis of safety are not implemented (the national roll-out of Pava spray being but one example) and from which they are unable to withdraw their labour without real risk to either their union as a whole – which could have its funds sequestered – or to themselves as individuals, who risk disciplinary action by their employer.

They have good reason to complain without doubt, our prisons are currently in a dreadful mess – a fact that few people with any knowledge of them would disagree with.

The safety in custody figures published on 31st October 2019, to which many are becoming worryingly inured, speak for themselves.

The reality of this situation is that our prisons are less safe now than at any time since records began, with more deaths, assaults and self-harm than ever before – despite a consistently reducing prison population.

While it’s true we have more prison officers now, it is also true that many are continuing to leave at a persistently worrying rate.

According to the latest HM Prison & Probation Service (HMPPS) Workforce figures, published just two days ago, HMPPS now has 49,906 full time equivalent (FTE) staff in post – an increase of 1,066 (2.2%) FTE staff in post since 30 September 2018. However, it needs to be remembered these are not all prison officers, not by a long way, in addition to prison service staff these figures include all the staff employed in the National Probation Service (NPS), a further 4,040 FTE staff in HQ and Area Services, and 1,735 in the Youth Custody Service (YCS).

What’s more the majority of this increase is due to the inclusion of 468 FTE staff at HMP Birmingham as of 1 July 2019 when that prison was taken out of private sector management and returned to the public sector following serious contractual failures by G4S.

The leaving rate of 11.9% amongst band 3-5 prison officers shows no sign of slowing, in fact the overall change in the last quarter compared to now, was just 0.4%.

So, with a violent, overcrowded, under-staffed prison service, where assaults and self-harm are at record highs, with prison officers continuing to leave at a high rate, and a prison officers union that has been statutorily neutered from taking any real action, these are dangerous times.

It is precisely because these are dangerous times that there is a need to balance the legitimate grievances of prison officers, their basic democratic right to withdraw their labour and, ultimately, take strike action, with the potential consequences to security, discipline, order and control that could result from such action in a prison system that is already on its knees and fast running out of options.

It is clear to me that we will never reduce prison officer grievances in our prison system by ignoring them – that is the blind alley we went down 30 years ago with prisoners and they took their grievances onto the prison rooftops at a cost of £90 million.

Preventing prison officers from taking any action will, I believe, simply inflame their grievances in the same way that it did with prisoners, leaving them with exactly the same burning sense of grievance – to quote Lord Bridge in the successful case I brought against the prison authorities in the UK Supreme Court in 1988:

“Nothing I believe is so likely to generate unrest among ordinary prisoners [for which read prison officers] as a sense that they have been treated unfairly and have no effective means of redress.”

Prison officers will not of course resort to roof-top protests, but they are capable of resorting to the kind of wild-cat, get-around-the-ban, type of action that the 2017 Briefing Paper was intended to deliver and that of itself can be far more damaging, occurring as it necessarily does without a ballot of the membership or any notice to the prison authorities.

We need to strike the right balance when it comes to strike action by prison officers.

In my view that means legitimacy, in terms of support from its membership, and sufficient notice to the employer that allows the withdrawal of labour without, at the same time, running the risk of flipping our prisons into complete self-destruct when it does occur.

What the measure of support should be, and the appropriate notice period is not for me to judge.

However, I would have thought a ballot of the union membership in which 75% vote, and 75% who vote agree to withdraw their labour seems reasonable – and a minimum of two weeks’ notice to the employer should encourage them to become involved in genuinely serious negotiations, that makes strike action less of a reality than it needs to become, while at the same time allowing them time to put in place national contingency plans to become effective if and when (God forbid) strike action does occur.

Mark Leech FRSA is the Editor of The Prison Oracle and The Prisons Handbook for England and Wales.