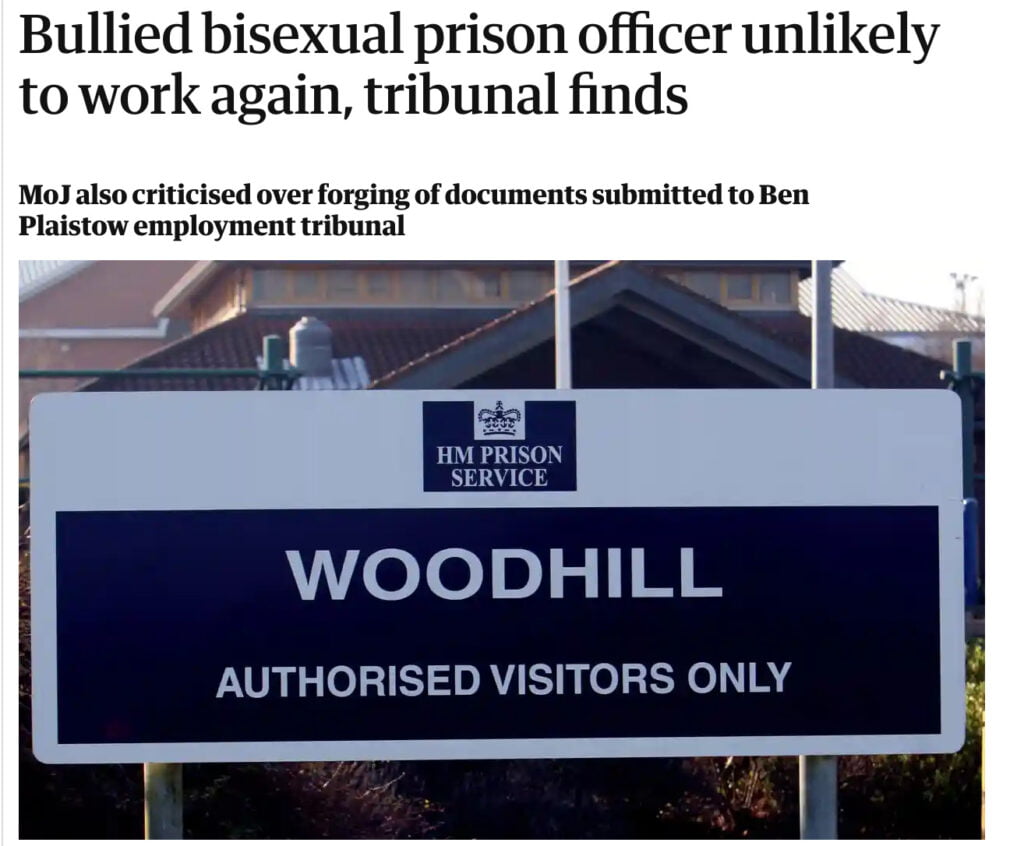 In a few days time the annual New Year’s Honours List will be published where so-called deserving individuals are either tapped on the shoulder with a medieval sword or have a useless thirty-bob medal pinned to their chest in an outdated ridiculous display of utter nonsense.

The truth however is that this is really a Dishonours System for it not only rewards perceived success, but it is also guilty of rewarding proven corruption too; which is why we must never forget the 2019 case of Prison Officer Ben Plaistow.

Ben was born on 2 May 1978. He began employment as a Prison Officer on 28 July 2003 and for the next ten years he had an excellent, misconduct-free career. Ben was transferred at his request to HMP. Woodhill on 7 September 2014 and, just two years later, he was summarily dismissed on the stated ground of gross misconduct on 9 August 2016 having been suspended on 11 January that year.

There the story may have ended but Ben Plaistow is made of sterner stuff – his dismissal was held to be unfair in law, based not on gross misconduct at all but simply his sexual orientation – and he won damages that cost the taxpayer over £2 million because he is unable to work again.

While Ben was employed at HMP Woodhill the Court held that he was the victim of discrimination and harassment as a result of breaches to his legally protected characteristic of Sexual Orientation.

The court found that, in respect of Prison Officer Ben Plaistow:

Ben was also the victim of harassment related to the protected characteristic of sexual orientation when:

These acts of discrimination and harassment were not one-off events they were shockingly part of a continuing series of acts.

Ben made the following written complaints, each of which was a protected act within the meaning of s.27 of the Equality Act 2010:

As a result of those protected acts, or one or more of them, the claimant was victimised, contrary to sections 27 and 39 of the Equality Act 2010 when,

In law Ben made protected disclosures, as defined by section 43A of the Employment Rights Act 1996 when,

The court held Ben Plaistow was unfairly dismissed – and worse was to come.

“Perhaps most seriously, given the identity of the respondent [HMPPS], is the forgery by late production and backdating of documents designed to ‘plug gaps’,” the tribunal ruling states.

It also refers to “corruption of documents by conflation, amendment or post-dated creation” and said the HMPPS’s failings go “beyond error”.

Ben’s colleagues were found to have engaged in a “campaign of victimisation” against him with their conduct that was found to be “vexatious, disruptive and unreasonable”.

Government lawyers involved in the case were also criticised for failing to demonstrate appropriate diligence and were accused of having “blindly” followed instructions from their MoJ colleagues.

The devastating Judgement in the Ben Plaistow case was handed down in February 2019.

It was not appealed.

The Prison Service Chief Executive, Jo Farrar, told me personally in a meeting in September 2019 that she had ordered “a full investigation” that was to report “within weeks”, that she would then consider “disciplinary action” against those involved and that the report “would be published” – the Ministry of Justice also undertook to publish the report.

However in July 2020 when the promised report had still not been published I wrote to the Ministry of Justice and discovered they had now quietly changed their mind and the report would now not be published – you can read their response here.

Almost two years after the Ben Plaistow judgment was handed down this case remains a festering sore on the face of HM Prison and Probation Service that will not be allowed to be quietly forgotten.

What we do know however is that in June 2019, in the Birthday Honours List Richard Vince, the Prison Service Director of High Security who was specifically named in the Court judgment that twice called him a liar was, four months after the judgment was handed down, bestowed with the Honour of being made a Commander of the British Empire (CBE) [last entry page 18.]

291.  As a fact, what Mr Vince told the claimant about his previous involvement in the matter was simply untrue. He admitted under cross-examination that he was aware of a clear view having been taken in relation to the case and to tell the claimant that he had no prior knowledge of the case was not true.

293. Mr Vince did not question how a number of officers could be engaged in a use of force incident, resulting in a prison officer being absent from work as a result of injuries received yet, “no one was aware of the event”. One officer followed the correct procedure by lodging his use of force form. To say that no one was aware of the event until the police had reverted to the prison with their view about prosecuting prisoner A, is manifestly untrue.

Richard Vince is the Director in charge of our High Security Estate – can you watch the person placed in charge of that part of the prison estate that has responsibility for the most dangerous prisoners our prisons have to contain, twice being called ‘a liar’ by a Judge, in a public judgement, that was not appealed, and watch him being bestowed with the CBE months later by HMQ and say nothing?

I’m sorry, I can’t – and I am not telling you anything here that I have not told Richard Vince directly to his face.

I like Richard Vince, I once respected Richard Vince, he lead from the front when HMP Birmingham had its problems and, prior to that, he managed HMP Manchester superbly; his was a good story. But alongside that once good story now runs another one, the one that is told here, and one that we cannot simply ignore just because it is inconvenient, inexpedient or frankly just because it is all rather embarrassing.

A Prison Officer was humiliated, assaulted, injured, his complaints were ignored and when he sought to take his complaint to Court those guilty of acting against him sought to defraud the court with lies and pervert the course of justice by falsifying documents – and all of this was done not by prisoners but by his own Prison Service colleagues.

The CBE awarded to Richard Vince was just another shocking slap in the face for Ben Plaistow, and the bestowing of an Honour that showed how corruption was at work inside the Honours System – a system that might well look the other way but which I for one will not be compromised by joining in.

The HMPPS Investigation Report into the Ben Plaistow case should be published, now, as was promised. Concealing its contents simply adds to the discredit that it has brought upon a once proud Service.

All of those named and shamed in the Ben Plaistow Judgment are still working in the Prison Service, some have been promoted, some to the rank of Governing Governor who are now running their own prisons, when in truth they should each have been subject to explicit disciplinary action and awarded the Order of the Boot out of the Prison Service.

Remember this case in a few days time when, on New Year’s Day, the latest batch of recipients will be announced by an Honours System that the Ben Plaistow case demonstrates like no other to be completely unfit for purpose.